How Can the City Better Engage the Public?

Back in 2010, I heard about a proposed demolition of some heritage buildings on Water Street. The developer wanted to build a 15-storey building, and a lot of people were angry about it.

I felt compelled to participate in the public discussion. My passion for the issue was less about taking a side, and more about making sure that everyone was having a rational debate. If we all stayed calm and spoke openly and respectfully, I knew we’d end up making the right decision.

So when I found a Facebook discussion about it, I weighed in. Not by yelling my opinions, but by calmly answering people’s questions or responding with other ideas and facts. I tried to facilitate constructive dialogue.

I also helped organize a public meeting, and the room was packed with media present. We tried to make it a discussion about urban planning, but people were frustrated and made that known. A few weeks later the proponent withdrew their proposal.

Victory! Right…? The battle was over, but all we were left with was a few now-empty buildings, a company with a little less goodwill, and a public now more divided than before. We didn’t feel victorious.

There was one bright light, however. On that Facebook group, a majority were neither “anti-heritage” nor “anti-development.” They were “pro-smart development,” and willing to talk about options.

So we took that attitude and created Happy City: a group whose sole mission is to inform, encourage, and facilitate public dialogue around civic issues. And we knew that, to succeed, we needed to bring people’s concerns and ideas to City Hall.

Which is why I decided to run for Council in 2013 — I wanted to bring the spirit of true engagement to City Hall. And thanks to the incredible support of my family, friends, and neighbours, I was elected and quickly got to work.

Over the course of my first year on Council, I worked with staff and a group of 25 dedicated residents on an Engagement Task Force to compose the City’s new Engagement Framework.

Unanimously adopted by Council, this new policy framework has the express goal of “creating a culture of engagement” at City Hall. It strives to create space for everyone to feel involved and listened to, helping to generate new ideas and solutions — together.

We launched an online engagement platform to help connect with as many residents as possible, and we’ve held several extended “campaigns” for projects like the Victoria Park revitalization, our annual budgets, and our cycling master plan review.

I think this marks a profound change in the way City Hall operates. We’re asking for input before making decisions, and keeping residents more informed than ever before.

But there is so much left to do, so we’ve launched a survey. How have we been doing with engagement? What we can do better? Please take a few minutes to share your thoughts; it will help us make St. John’s better, together. 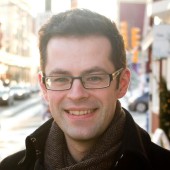 All the News Tuesdays …

Art, Discourse, and a Meal: “New-Found-Lands” Programming to Explore the NL-Caribbean Connection